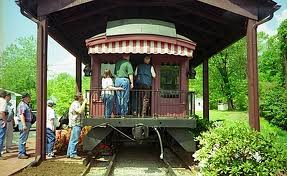 Step back in time… Visit the 101 Car in Big Stone Gap, Virginia

Interstate Railroad Private Car #101 has a long and illustrious history. Built in 1870 for the South Carolina & Georgia Railroad, the car and the railroad were acquired by Southern Railway in 1899. It was then rebuilt and placed into service as Office Car #117.

In 1912, Southern swapped the car to the Virginia & Southwestern Railroad in Bristol, Virginia, for a similar car owned by the V&SW. It became V&SW #100 and was assigned to Bristol for the next four years.

In January, 1916, President H.L. Miller of the Interstate Railroad approached Southern Railway, V&SW’s new owner, regarding the car. A deal was struck, and the car became Interstate Car #100. The purchase price was $3,500.

As Interstate #100, the car was used extensively for inspection trips and off-line trips until 1924, when the railroad acquired another second hand office car from Southern Railway. The “new” car was given the treasured number of 100, and the old wooden car was renumbered to #101. The newer car was subsequently sold by the Interstate in 1936, and car 101, was retained for official use thereafter.

In 1959, this well-traveled vehicle was retired and transported from Interstate’s headquarters at Andover to Dorchester Lake on Black Creek in Wise County, Va. for use as a hunting cabin. These properties were subsequently purchased by Humphrey’s Enterprises, who donated #101 to The Gap Corporation in 1988. A successful community based fundraising effort resulted in the car being moved to Big Stone Gap where it was restored to its present condition and placed in service as the Lonesome Pine Regional Tourist Information Center.

The car is an excellent example of typical passenger car construction for the late 19th century. As built, it contained an observation room, two state rooms, a dining area, facilities for the porter and a kitchen area. Most of the original fixtures are intact, including the lavatories, lighting fixtures and even the speedometer in the rear observation area.

Every effort has been made to retain the original appearance of the car, including the paint scheme and several fixtures that had to be fabricated from original drawings. The only departure from a faithful restoration has been the trucks (wheel sets) which are of a more modern design that the originals. Given the rarity of such components, this concession can be easily forgiven.
With the restoration complete, the car is poised to enter its new career, one that will soon span three centuries.

During the 1870s, much was published about the mineral and timber resources of the Appalachian Mountains. General John Imboden focused on Three Forks as the location for industrial development, touting it as the “new Pittsburgh of the south.” The town, which was then being called “Mineral City” was incorporated as Big Stone Gap in 1882.

Many developer’s flocked to Big Stone Gap. These included Rufus Ayers, the Goodloe and Wood brothers, the Slemp and the Fox family.
John Fox Jr. wrote about his experiences in “The Gap” and the surrounding region in his 12 novels and 45 short stories. He became the most poplar American novelist of his time and immortalized Big Stone Gap in his novel “The Trail of the Lonesome Pine.” In modern times, Big Stone Gap is best known for a series of novels by hometown author Adriana Trigiani. In addition to the two best-selling authors, the town has produced the private secretary to President Calvin Coolidge, a governor of Virginia, numerous artisans and musicians, a Grammy-winning recording studio, two NFL running backs and many others who have contributed to our state, nation and world!