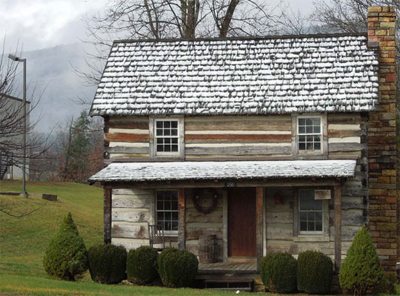 The Keffer Log House (two-story dwellings are called houses, not cabins!) was rebuilt during the summer of 1999 by Roger Davis of Montana and Robert Echols of Happy Hollow. Mr. Echols lived next door to the Keffers when he was young.

The lot on which this cabin is located was the horse corral used by men coming to Court in New Castle. The adjacent property has a clause in its deed stating “there shall always be a path to the creek to water the horses.” The path and John’s Creek are behind the cabin.

The most recent acquistion is a trundle bed from the estate of Ruth Martin Wills, originally from Sinking Creek. Her child’s chair hangs on the wall above it.

Virginia encouraging online travel, will be waiting for travelers