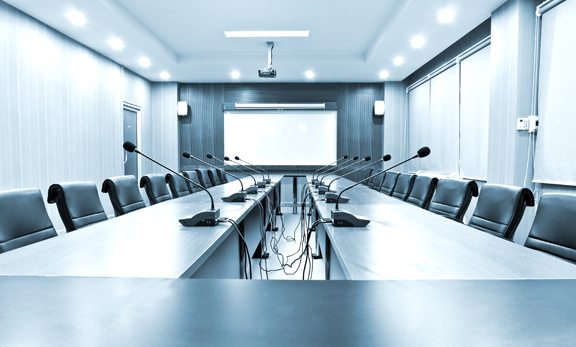 VIEW VIDEOS AND PRESENTATIONS FROM SPEAKERS

Learning never stops at VACo. Education is a process that continues every day and is a pillar in VACo activities.

Education was the focus on Aug. 16 when more than 100 county officials and staff convened in Henrico County for the VACo Summer Meetings.

“We were pleased with the turnout and the participation of committee members,” said Jim Campbell, VACo executive director. “Our members are dedicated to the legislative process and want to better educate themselves on the issues that will affect their localities in the future.”

The day started with a stimulating conversation where more than 25 members gathered for the newly created VACo Leadership Series. Attendees learned from current Board members ways to increase leadership opportunities within the association and discussed common questions newly elected supervisors have.

Next up was the VACo Educational Seminar, which presented current issues that will be debated during the upcoming General Assembly session.

Anne Oman, legislative fiscal analyst for the House Appropriations Committee, spoke to members about the state budget. Oman described the composition of the budget, reviewed the 2013 session and previewed the issues for the 2014 session and the next biennium.

Travis Hill, deputy secretary of the Department of Agriculture and Forestry, addressed issues associated with HB 1430 (2013), which amended the definition of farming in the Right-to-Farm Act. He detailed the progress of the On-Farm activities Work Group and urged both sides to reach a compromise in anticipation of additional legislation proffered in 2014.

Mike Flagg followed with a discussion about stormwater issues. Flagg is the director of public works for Hanover County and has 27 years of experience. Flagg gave a detailed summary of the challenges facing counties with regulatory mandates as well as changes in stormwater management.

Jason Powell, Senate Finance Committee, closed the educational seminar with a presentation on transportation issues. Powell’s main focus was HB 2313, the transportation bill that was adopted by the 2013 General Assembly. HB 2313 will fund $850 million to transportation projects from new and existing revenue sources when fully implemented in 2018.

“We received positive feedback from members in regards to the educational seminar,” said Jack Miller, VACo President. “Many members brought the knowledge they gained from the seminar to their respective steering committee meetings. This made the meetings much more fluid and productive.”

In the Environment and Agriculture Committee meeting, members devoted much of the time to stormwater issues. The committee recommended an increase from 72 percent to 90 percent the share of revenues allocated to counties from stormwater permit fees paid by developers. Under this proposal, the state share would shrink from 28 percent to 10 percent. David J. Hirschman, Center for Watershed Protection, gave an excellent presentation on stormwater management.

Bill Shelton, director of the Virginia Department of Housing and Community Development, and Joseph Hines, board member and legislative advocacy committee chair for the Virginia Economic Developers Association, addressed the Community and Development and Planning Committee. The committee debated many issues including an increased focus on advocating for programs that benefit local and regional economic development efforts and against regulation that hinder these efforts. The committee also decided to focus on protecting local land use control and ensuring localities have the tools necessary to provide services and infrastructure to new developments.

In the Health and Human Resources Committee, members agreed to support increased local human service funding as their top priority. The committee also discussed opposition to increased training and education requirements for part-time EMS volunteers recognizing the cost burden it places on counties. The committee further discussed Comprehensive Services Act (CSA) issues, particularly that it should be subject to the guidelines of the Administrative Process Act (APA). Lastly, several committee members voiced concerns over the regulation, or lack thereof, of group homes.

The mid-afternoon steering committee meetings were just as productive.

The Compensation and Retirement Committee heard from Robert Schultze, director of the Virginia Retirement System. The committee also directed staff to put forward strong positions in support of full funding for state mandated positions and urging the state to share responsibility for unfunded teacher pension liabilities as top priorities. Local governments and the state share responsibility for paying the cost of teacher pensions, but under new national accounting standards, localities will have to claim all unfunded liabilities for teacher retirement plans after June 15, 2014 on their financial statements. Schultze confirmed that all of the $15.2 billion in unfunded teacher pension liabilities will be apportioned to localities unless the state pays its portion of teach pension contributions directly to VRS. Some of the other issues discussed include pension funding, efforts to control workers’ compensation costs and support of state assistance for police departments through “599” Aid to Localities.

The Administration of Government, Public Safety and Telecommunications Committee discussed a wide variety of issues. There was a discussion about the different entities that provide population statistics to the General Assembly for use in determining aid to localities. The committee also debated the cost of elections to localities, including the high cost of primaries and of voting machines. While discussing the Commonwealth’s 2015 public safety interoperability goals, VACo General Counsel Phyllis Errico gave an update on FIRSTNET, the federal mandate to build a nationwide Interoperable Broadband Public Safety network. The committee considered a Freedom of Information Act proposal from Hanover County.

Finally, the Transportation Committee heard an excellent presentation from Thelma Drake, director of the Department of Rail and Public Transportation. Jason Powell also addressed the committee.