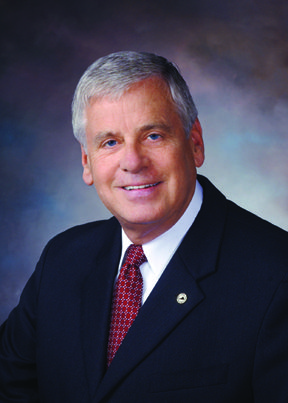 When James D. Campbell was hired as Executive Director of the Virginia Association of Counties in November 1990, one of his chief mandates was to increase the visibility of the association. Over the next 25 years, Campbell excelled in raising VACo’s prominence and developing key financial, educational and membership programs that impacted several generations of county supervisors and staff.

Campbell, the longest serving Executive Director in the association’s 81-year history, also oversaw the purchase, renovation and maintenance of VACo’s permanent headquarters – an environmental and structural jewel in downtown Richmond.

“It has been an honor to serve the 95 counties of Virginia over the past 25 years,” Campbell said. “I’ve made many friends along the way and will cherish each friendship. I am proud of what we’ve accomplished during my tenure and believe the association is primed to launch to greater heights in the coming years.”

Campbell has inspired countless local government officials and has been a leader, protector and promoter of county interests. Under his leadership, VACo has become a legislative powerhouse that is well-known for being tough, fair and knowledgeable.

Campbell had a message for member counties when he became Executive Director – by sticking together we enhance our legislative efforts in Richmond. It took little time for counties to recognize Campbell’s leadership and legislative knowledge and influence. He led the charge in the General Assembly and won key victories ranging from tax and finance issues to important policy matters that impacted the Commonwealth’s counties. Campbell’s efforts led to 100 percent membership in the association. Counties have stuck together ever since.

“Jim has been a visionary in professional association matters,” VACo President Judy Lyttle said. “Counties have enjoyed the fruits of successful non-dues revenue ventures. Jim was instrumental in developing a risk management program that began with property and liability insurance coverage and ventured into health insurance to lower premiums for county employees. Through Jim’s leadership, counties have saved millions of dollars.”

In 2008, Campbell recognized counties’ liabilities to account for Other Post-Employment Benefits (OPEB). He helped form an OPEB Trust that pools funds to earn a higher rate of return on investments. The OPEB Trust currently has almost 50 counties, cities and towns investing nearly $1 billion, which is believed to be the nation’s largest pool of its kind.

Campbell also facilitated the establishment of the Virginia Investment Pool (VIP) in February 2014. Local governments use the investment program to enhance their return on reserve funds. Currently, the VIP program has 30 localities participating with more than $300 million invested in the pool.

VACo struggled financially in 1990. The association was in the middle of a second consecutive year of “red ink” with projected losses of more than $50,000. Campbell carefully managed available resources and helped VACo end the 1991 fiscal year in the black. VACo has been fiscally sound every year since and has managed to build sizeable reserves and assets.

But perhaps Campbell’s most notable and longest lasting achievement is 1207 East Main Street, VACo’s permanent headquarters that opened in April 2009.
Under Campbell’s leadership, the renovation was completed with priority given to preserving the structure’s historical significance while developing a “green” building. 1207 East Main Street earned a gold LEED certification and is considered one of the most environmentally friendly buildings in the Richmond area. VACo headquarters is the perfect example of how an organization can restore history while being an industry leader in energy efficient construction.

One of Campbell’s legacies for his staff will be the way he’s treated employees with class, respect and a sense of humor. VACo staff will attest to Campbell’s positive management style that allows for growth and innovation.

“I appreciate Jim’s mentorship, and we will never forget his accomplishments,” Deputy Executive Director Dean Lynch said. “We will always remember how he’s supported the VACo Team throughout his tenure. Jim will continue to be a resource for counties in many ways.”

Campbell said he and his wife Christine plan to do more traveling. “I look forward to the next phase of my life, and I’m excited to spend more time with family and friends,” Campbell said.

Visit Stafford County and the Gari Melchers Home and Studio