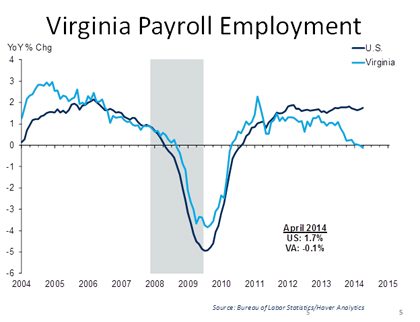 Debate over the budget changed quickly in early May with news of the now expected FY 2014 – 2016 revenue reduction of $1.55 billion due to unexpected tax policy-related timing shifts and income tax withholding revenue trends that are indicating that FY 2015 and FY 2016 growth of about 4.3 percent per year will not be met. Payroll withholding growth is currently running about 2.5 percent and trending down. There is essentially zero year-over-year job growth in Virginia (see chart) and actually negative growth in high paying business and professional jobs.

While the FY 2014 – 2016 enrolled budget does not technically reduce the revenue forecast, it does anticipate the fall revenue forecast reduction by creating a revenue reserve of $842 million from a series of spending reductions. The remaining $707 million in reduced revenues are expected to be covered by the state’s Rainy Day Fund.
Most new spending above the FY 2014 base originally proposed in the introduced budget has been removed except for the following few high-priority categories: