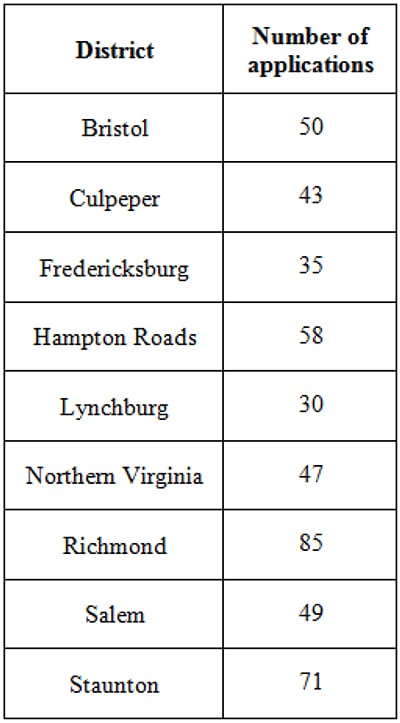 Transportation projects will be vying for an estimated $850 million in available funds. The SMART SCALE process will score projects based on quantifiable factors, such as: safety, congestion reduction, accessibility, land use, environmental quality and economic development. Between 2015 and 2017, 757 applications were received, 691 projects met the requirements to be considered for scoring, and 310 projects were funded for a total of $2.45 billion.

Throughout the September CTB meeting, Virginia Department of Transportation (VDOT) leadership provided updates on tornadoes and other effects of tropical storm Florence on Virginia’s communities. Across the Commonwealth, roads are closed due to flooding, and clean-up crews are clearing downed trees and debris from roadways.

“At the request of the United States Department of Transportation, Virginia stands ready to respond with post-storm communications support in North Carolina,” said Secretary of Transportation Shannon Valentine.

A $6.6 million contract was awarded to J.L. Kent and Sons, Inc. of Spotsylvania to add capacity to Cedar Level Road in the City of Hopewell for a 0.7 mile stretch from just south of Portsmouth Street to just north of Miles Avenue. The road currently has two lanes and will be widened to three lanes, including two travel lanes and a center two-way turn lane. New bike lanes and sidewalks will also be added. The project, in VDOT’s Richmond District, is expected to be complete in late summer 2020.

The CTB voted to approve policy guidelines for implementation of governance reforms for the Washington Metropolitan Area Transit Authority (WMATA). As part of the Comprehensive WMATA Funding and Reform legislation passed during the 2018 General Assembly Session, the Department of Rail and Public Transportation coordinated with the Northern Virginia Transportation Commission in the development of the proposed guidelines. The guidelines will assist the CTB in performing an objective annual review of WMATA’s compliance with the required reforms.

Appointed by the governor, the 17-member CTB establishes the administrative policies and approves funding allocation for Virginia’s transportation system.