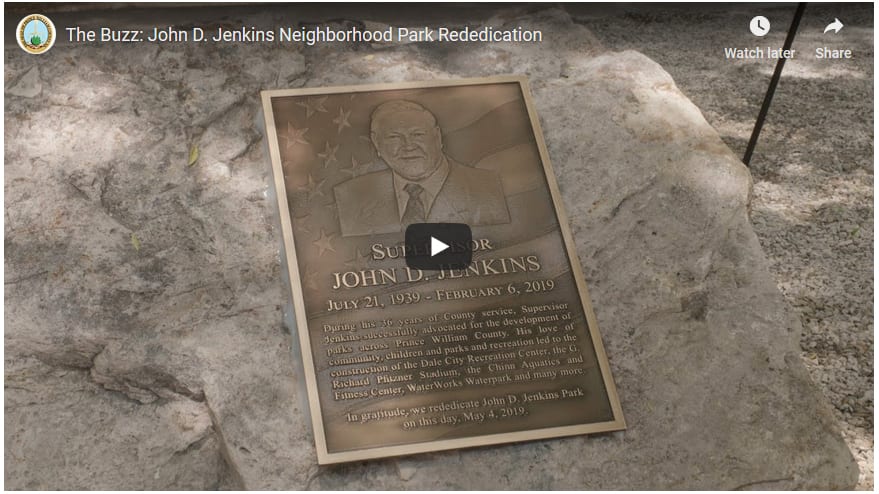 Members of the Board of County Supervisors, the community and the family of the late Neabsco District Supervisor John Jenkins recently came together for the rededication ceremony of the John D. Jenkins Neighborhood Park. The event not only unveiled new features of the park, but was an opportunity to remember Supervisor Jenkins and his love for park facilities.

“We need to reintroduce this park to the community, and that’s exactly what we’re doing today; and we’re also celebrating the life of a great supervisor,” said Seth Hendler-Voss, the director of the county’s Department of Parks, Recreation and Tourism.

Improvements at the park, located at 13499 Hillendale Drive, include resurfacing and restriping the basketball courts, the addition of a 10-foot waiting spectator area with benches, and new fencing. Construction on an ADA-accessible walkway to and from the courts to the park is scheduled to begin in mid-May. In addition, members of the community, including the Leadership Prince William Class of 2019, came together before the ceremony as part of Comcast Cares Day to help spruce up the park by painting two pavilions, mulching, landscaping and installing a commemorative plaque.

Hendler-Voss told the gathering he only knew Jenkins a couple of years, but said he knew Jenkins had an affinity for parks. “He loved parks and recreation. He loved children, and he knew the connection between parks and strong communities. He was also a people person, and he understood that parks are the neutral ground for building relationships. It’s facilities like this where people find commonality.”

Hendler-Voss told how Jenkins was instrumental in forming the Sharron Baucom-Dale City Recreation Center and getting Pfitzner Stadium built. He also said that Jenkins spearheaded efforts to make parks easy for people with disabilities to use. “He was a supporter of parks throughout the county. He always wanted to make sure that the parks were accessible to everybody.”

Chairman of the Board of County Supervisors Corey Stewart shared a story about how Jenkins, the longest serving county supervisor, felt about parks when the board was trying to determine funding for projects one year. “We thought we had it divvied up kind of equally among the supervisors, and I said, ‘Hey John, do you have any park projects?’ He said ‘Yeah, I sure do.’”

So, Jenkins took Stewart to Waterworks Water Park in Dale City to see where the park needed improvements. The price tag was in the millions, which Stewart said he thought was too much.

“I said, ‘You know that just is not going to work that’s going to take up almost the entire amount of money that we have from carry over.’ John said, ‘Perfect,’” Stewart told the crowd gathered at the rededication. Jenkins got his improvements at Waterworks.

Stewart, a Republican, also said that it was easy to cross party lines to work with Jenkins, a Democrat. “… it was easy to work with John Jenkins. He was very reasonable all the time,” Stewart said. “To the Jenkins family, what a great father, husband and grandfather you all had, and certainly all of us in the county miss him so much.”

Virginia Sen. Jeremy McPike, who represents the 29th District, said that Jenkins and his wife Ernestine always sought to improve things. “I think it’s so meaningful that the rededication involves organizations and volunteers coming forward to spruce it up, to see something, and leave it better than you found it.”

Supervisor Victor Angry, who replaced Jenkins on the board, told a story about a 20-year-old former high school football player whom he met while he was campaigning for Jenkins’ empty seat. He said the football player remembered Jenkins approaching him several days after a big game and congratulating him on a key catch.

“Every door I’ve ever knocked on, every person I’ve ever talked to had nothing but great things to say about John Jenkins,” Angry said. “We can all only hope to be that good in life.”
Jenkins’ son, Mark Jenkins, also spoke at the ceremony and said his father enjoyed taking care of people. “It’s no surprise that things like parks and schools are being named after our dad because that was his passion.”

He also thanked people for coming to the ceremony. “On behalf of the Jenkins family, we thank you for continuing to honor our dad, and our grandad and our great-grandad.”

Bringing Innovation and Collaboration to Jurisdictions Across the Nation