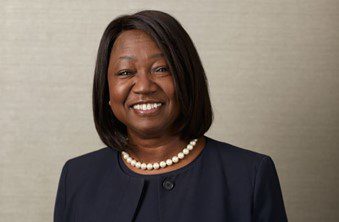 The Finnegan Whiting Award recognizes Cynthia Hudson for her significant and sustained contributions to Virginia local government law and LGA. The Award noted that her “knowledge of local government law combined with her expertise in public policy, makes her one of the most accomplished and well-respected attorneys practicing in Virginia’s public sector today.” In addition to her distinguished employment history, Ms. Hudson has served the Commonwealth of Virginia as Chair of the Governor’s Commission to Examine Racial Inequity in Virginia Law, Co-Chair of the Governor’s Commission on Diversity, Equity and Inclusion, and as a former President of LGA.

Just prior to her receiving the award, the President of LGA, Michelle R. Robl, announced that the LGA Board of Directors had added the name of Elizabeth D. Whiting to the title of the award. Ms. Whiting, who died in September, was an authority on local government law, a mentor to local government attorneys throughout the state, a former president of LGA, and a prior recipient of the Finnegan Award. The presenters of the Finnegan Whiting Award noted it was particularly appropriate that Ms. Hudson was the inaugural recipient of the renamed award as she, like Liz Whiting, “is beloved and deeply admired and respected for her remarkable career, her integrity and intellect, and her generous spirit.”

LGA promotes common interests and an exchange of information among its members on legal issues that are particularly relevant to Virginia’s counties, cities, and towns. The LGA’s member services include conferences, a legal handbook, a monthly newsletter, and other services intended to inform and enhance the practice of local government.