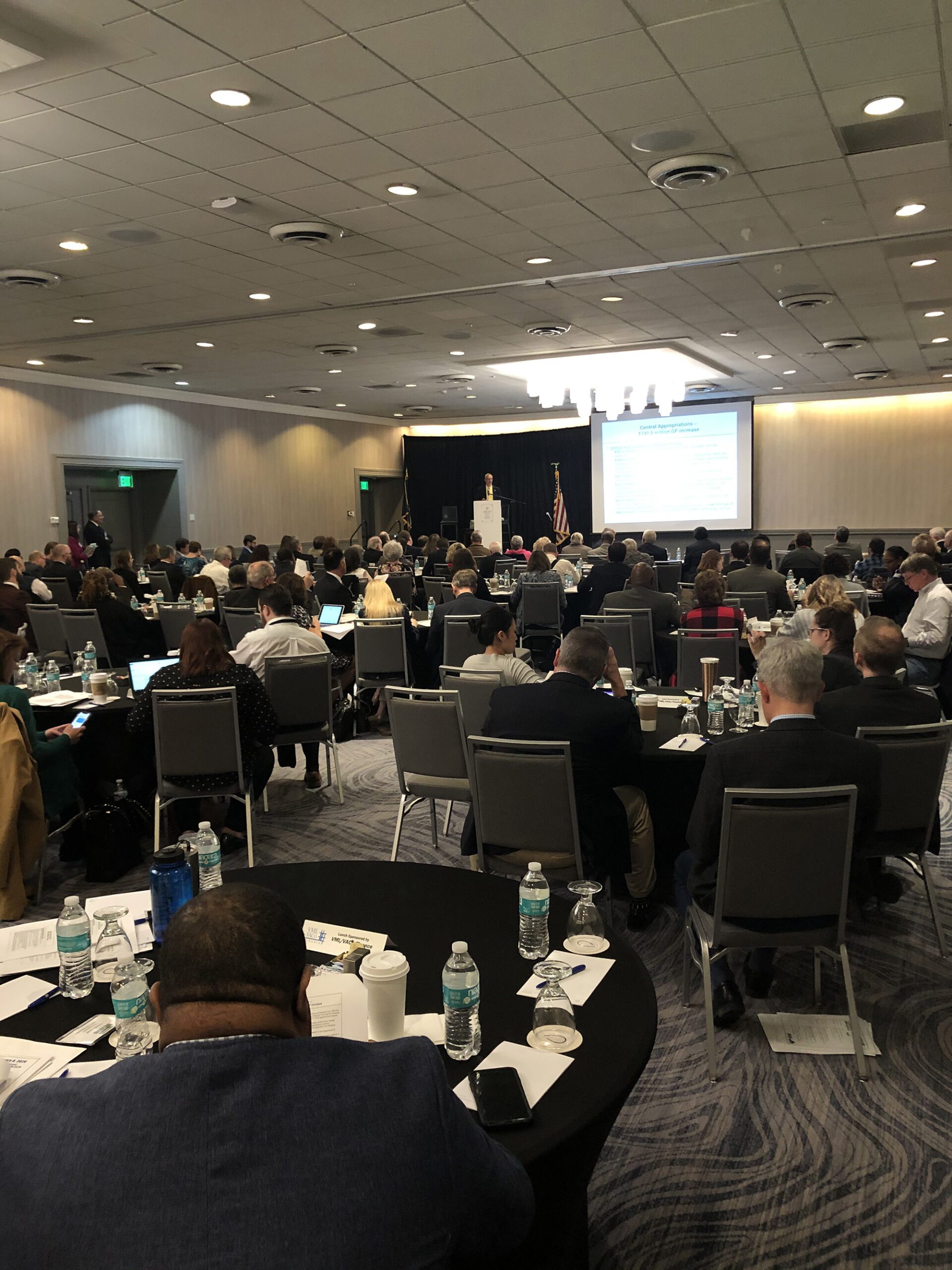 Approximately 150 participants at the 2020 Finance Forum kicked off the New Year with a deep dive into major financial issues affecting local governments. The event, co-hosted by VACo and VML, was an opportunity for attendees to receive briefings on the Governor’s introduced budget and its implications for local governments, as well as other top issues of interest. VACo President Steve Bowen reminded attendees of the significant financial issues to be decided in the upcoming General Assembly session and encouraged VACo and VML members to remain involved in the discussions.

Both Deputy Secretary of Finance Joe Flores and Jim Regimbal also stressed the importance of local engagement in state budget deliberations. Deputy Secretary Flores explained the process by which the introduced budget was developed over the summer and fall, and provided highlights of major spending and savings items. He suggested that the Administration would have an “open door” for additional discussions about items that were not included in the budget. Jim Regimbal’s presentation framed the biennium budget as an opportunity for the state to strengthen its partnership with local governments and offered several recommendations for ways in which the state could alleviate local fiscal stress, such as fully funding staffing standards for Constitutional officers, assisting localities with responsibilities under the Children’s Services Act, or paying down the unfunded liability in the Virginia Retirement System’s teacher plan.

Patricia Bishop, Director of the Virginia Retirement System, explained how the proposed employer contribution rates for the new biennium were developed; rate increases are largely attributable to lowering the expected rate of return for VRS’s investments as a result of concerns about slowing global growth. Richmond Times Dispatch columnist Jeff Schapiro provided some important context on the political landscape against which the budget deliberations will take place.

Two sets of presentations on information technology-related issues concluded the afternoon. Rick Ellrod, Director of the Communications Policy and Regulation Division in Fairfax County, and Debra Bryan, Associate City Attorney in the Virginia Beach City Attorney’s Office, spoke about current telecommunications issues, including challenges posed by recent Federal Communications Commission actions to local authority to regulate siting of telecommunications facilities and to work with cable providers on important in-kind contributions made as part of cable franchise agreements. Daniel Persico, Chief Information Officer for the Department of Elections, and Barry Condrey, Chief Information Officer for Chesterfield County, discussed the cybersecurity standards recently adopted by the State Board of Elections for local IT systems that interact with the state’s voter registration database and how the state is working within existing resources to assist localities in complying with the new standards.