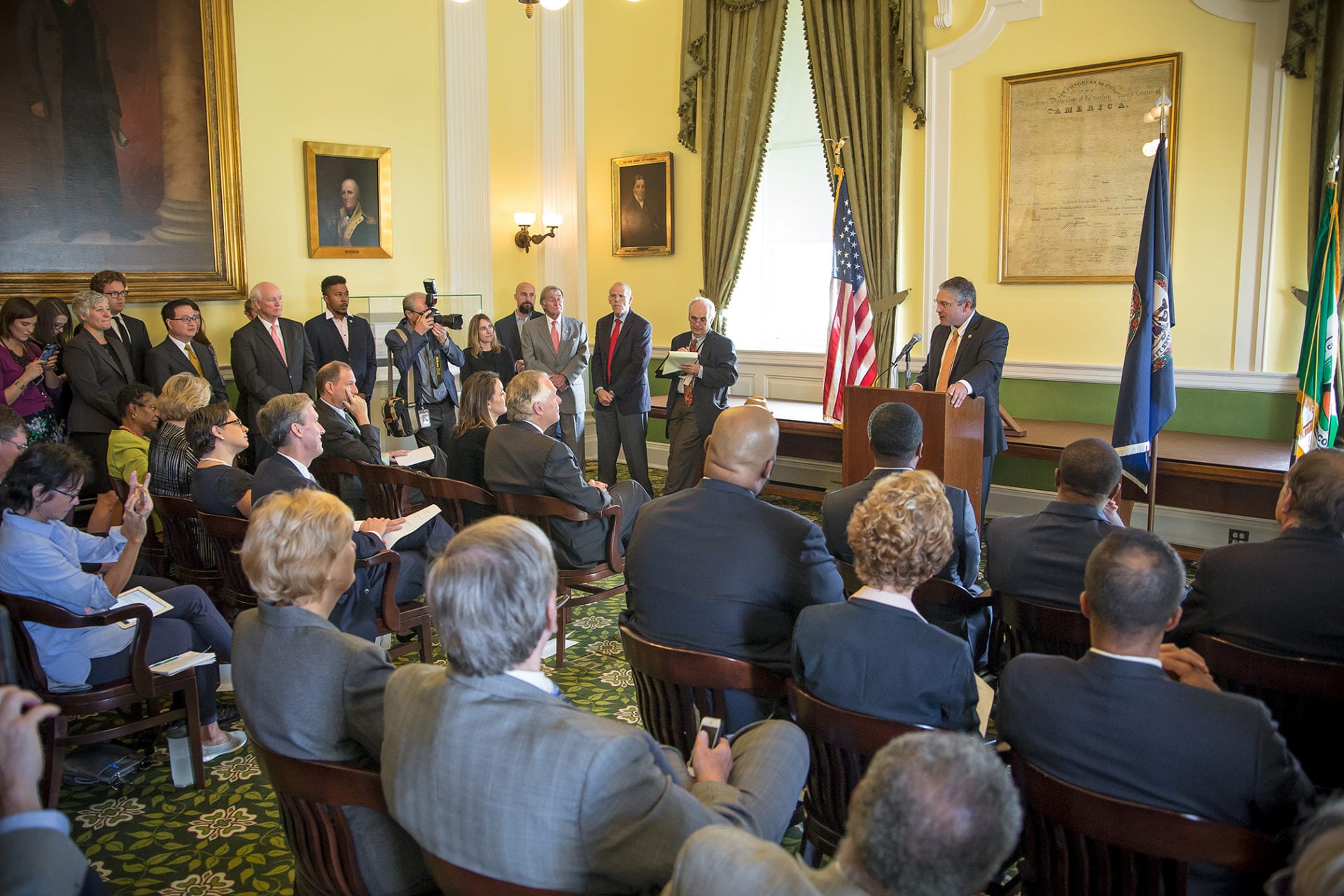 Henrico County officials recently celebrated the announcement that Facebook will invest $750 million to establish a data center in the county’s White Oak Technology Park, noting that the industrial center was designed to accommodate such high-tech operations and pointing to tax-rate changes earlier this year intended to make Henrico more attractive to businesses like Facebook.

County officials joined Governor Terry McAuliffe, representatives from Facebook and others at the Virginia State Capitol, where the governor announced the social media giant’s plans to build a 970,000-square-foot data center on a 300-acre site in the eastern Henrico industrial park. The project will bring thousands of construction jobs to the region, McAuliffe said, and will create more than 100 full-time positions when complete.

The project’s total investment will top $1 billion, including the construction of solar facilities throughout the state to power the data center entirely with renewable energy.
Varina District Supervisor Tyrone E. Nelson nodded to Henrico’s investment in infrastructure for White Oak, which offers high-speed fiber optic cable from multiple providers, high-capacity electric power designed for large-volume loads and water service with a firm capacity of 10 million gallons per day, among other features.

“When Henrico invested over $40 million in infrastructure improvements to make White Oak the unique park it is today, we believed it would yield these kinds of announcements,” Nelson said.
The supervisor also pointed to a near-90 percent tax-rate reduction for data centers approved earlier this year by the county’s Board of Supervisors. The change established a business property tax rate of 40 cents per $100 assessed value for computers and related equipment for data centers, dropping it from the previous rate of $3.50.

“When the county set up the special tax rate for data centers, we could only hope it would yield a $750 million investment like this,” Nelson said. “Thank you, Facebook, for making us look so smart.”

With the addition of Facebook, Henrico now has nearly 20 data centers. County Manager John A. Vithoulkas noted that with the benefit of the data-center tax rate, assets like White Oak Technology Park and proximity to a new trans-Atlantic fiber optic cable that will connect North America to Europe through Virginia, he is optimistic the county will be able to recruit more. The businesses provide high-paying jobs and bring significant and ongoing capital investment, he said.

“The last 10 months have been special — and intense — for Henrico County as we’ve worked with the Facebook team,” Vithoulkas said. “Today’s announcement makes all the effort worthwhile.”
Vithoulkas noted that county staff had worked to prepare land-disturbance permits in time for the announcement.

“We’ve been with you for the last 10 months, and I promise we’ll continue to be with you as you build out your 300-acre site,” he told Facebook officials.

Rachel Peterson, director of data center strategy for Facebook, pointed to Henrico’s quality infrastructure and supportive business climate for data center development as important factors in the company’s decision. Other factors included partnerships within the local community and a strong pool of local talent.

“We could not be more thrilled to locate our next data center here,” Peterson said. “Henrico County and the Commonwealth of Virginia have it all.”