The FY 2018 “Caboose” bill contains $294 million in increased 2016-18 biennium General Fund (GF) revenues from last year’s adopted budget. The increased resources are due mostly to the higher base resulting from the $137 million FY 2017 surplus. Growth in FY 2018 general fund revenues at 3.4 percent was left unrevised in the introduced “Caboose” budget. Transfers in FY 2018 were revised down $18.1 million from last year’s adopted budget, while available balances increased. An additional $40 million each in Lottery proceeds and Virginia Health Care Fund (VHCF) revenues are also now expected for FY 2018. These non-general funds are used for state K-12 education and Medicaid expenditures, respectively.

The 2018-20 proposed budget relies on a slightly increased revenue forecast and even more importantly, a much lower forecast of Medicaid spending growth than has been recorded over the last 20 years. Medicaid spending is forecast to grow only 2.3 percent in FY 2019 and 3.4 percent in FY 2020. This contrasts with the 7 percent average growth experienced consistently over the last 20 years and the $86 million in additional funding that had to be provided in the caboose bill for FY 2018. The low growth forecast is primarily from an expectation that a large expansion of managed care on January 1, 2018, will drive cost savings in the Medicaid program. Medicaid expansion under the Affordable Care Act is also embedded in the budget, saving an additional $421 million. Medicaid expansion savings are assumed from the enhanced federal match, inmate medical costs, and substance abuse and mental health treatment. The low forecast and Medicaid expansion savings result in no projected growth in Department of Medical Assistance Services Medicaid spending in FY 2019, and only $145 million in FY 2020. It is likely the General Assembly will take a close look at the Medicaid budget.

The other large initiative in the Governor’s 2018-20 biennium budget is a proposed two percent salary increase for state employees and state-supported local employees ($49.4 million), and for SOQ funded school positions ($51.3 million), beginning December 1, 2019. 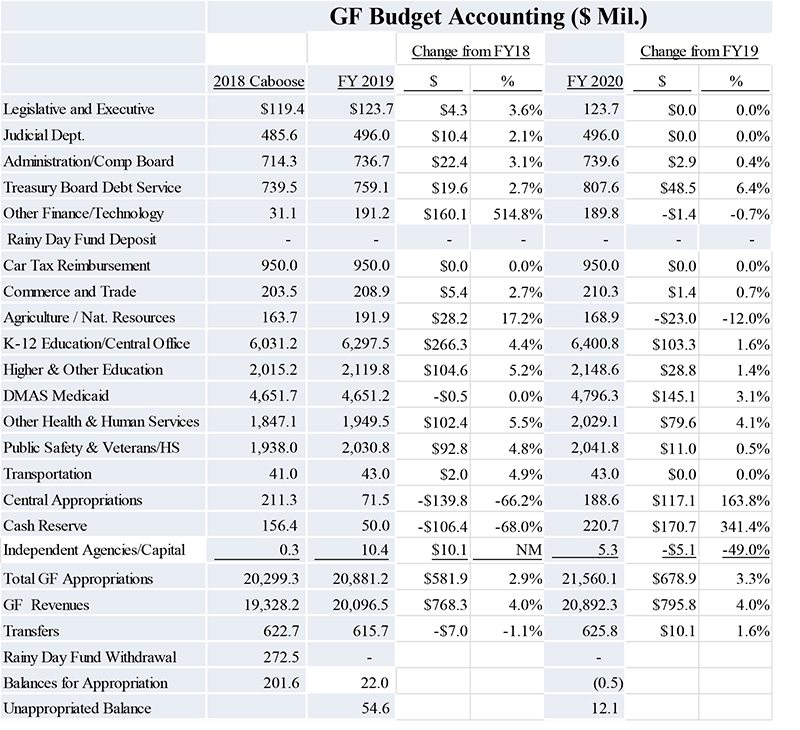 K-12 education is proposed to receive about 34.5 percent, or $636 million of the additional $1,843 million total new GF spending in the 2018-20 biennium above FY 2018 spending. This is slightly more than the 30 percent K-12 receives of total general fund spending. Lottery earnings for public education are estimated at $586.7 million per year.

Dept. of Housing and Community Development

-$85 million from existing NVTA revenues in recognition that $7B in projects and on-going revenues have been put in place over the last four years without any regional funding
-$65 million from restoring key regional taxes back to rates intended by General Assembly in 2013 – Grantor’s Tax and Transient Occupancy Tax back to levels from the HB2313 Conference Report and regional fuel tax floor
-Funding is contingent on (i) implementation of “Reform Board” as recommended by Secretary LaHood for 3 years and (ii) the District and Maryland providing their share of the $500 million
-Allows the Northern Virginia Transportation Commission to appoint non-elected officials to the WMATA Board
-Also provides $19 million in dedicated, on-going funding for VRE and restores PRTC regional fuels tax to help fund VRE 2040 systems plan

A closer look at the House and Senate budgets

VACo advocates for quick approval of a responsible budget