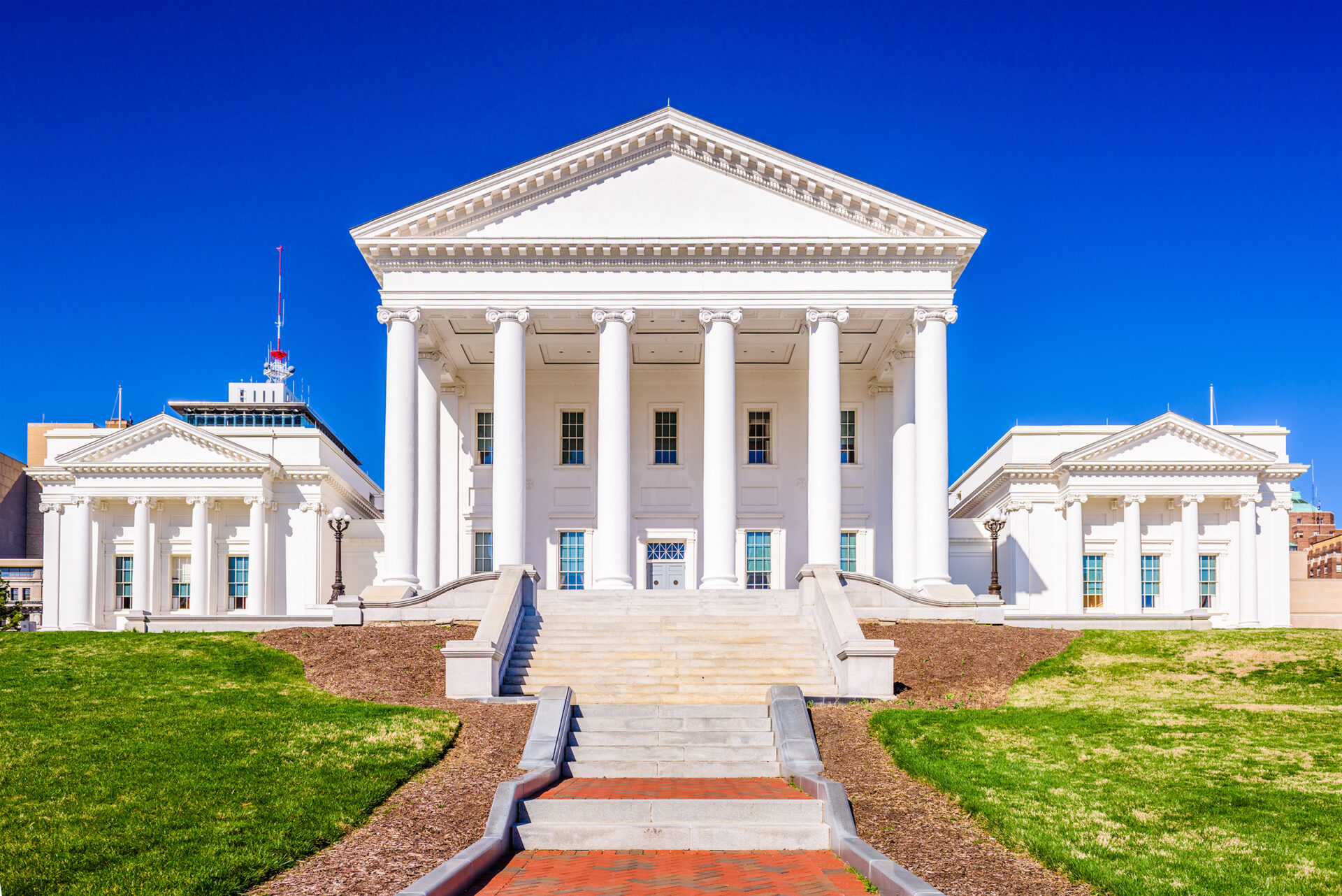 Among the bills considered at the reconvened session were the following bills of interest to local governments:

HB 277 (Coyner)/SB 622 (Favola), as passed by the General Assembly, require recovery residences to disclose to prospective residents their credentialing entities and provide that regulations promulgated by the State Board of Behavioral Health and Developmental Services must require recovery residences to comply with any minimum square footage requirements related to beds and sleeping rooms established by their credentialing entities, which must be no less than the square footage requirements set forth in the Uniform Statewide Building Code.  The Governor’s amendments clarify that the greater of the two minimum square footage requirements would apply.  Reconvened session action:  The General Assembly accepted the Governor’s amendments.

HB 307 (Freitas) provides that a public body subject to the Virginia Freedom of Information Act shall make all reasonable efforts to supply records requested by a citizen at the lowest possible cost.  The bill also requires a public body, prior to conducting a search for records, to notify the requester in writing of the public body’s right to make reasonable charges not to exceed its actual cost incurred in accessing, duplicating, supplying, or searching for requested records, and inquire whether the requester would like a cost estimate in advance of the supplying of the requested records.  The Governor’s recommended amendment adds language that exempts from charge scholastic records requested by a parent, guardian or student who is the subject of the records (and is over the age of 18) for accessing, duplicating, supplying, or searching for records.  This amendment also deletes language which exempts from charge property records requested by the owner of the property that is the subject of such records.  Reconvened session action:  The General Assembly accepted the Governor’s amendments.

HB 384 (Davis) protects state and local government employees of the Commonwealth, as defined in the bill, from being penalized by their employer for expressing their opinion regarding a current or proposed regulation, rule, policy, position, or other action or purpose of a unit of state or local government at a hearing of a public body during the time designated for public comment when such employees are speaking on their own behalf as members of the public.  The Governor’s recommended amendment removes the language that allows state employees to speak at public comment period at state government meetings, but adds that state employees can speak at a local public body or school board hearing during the public comment period.  In the local employee section of the bill, the Governor’s amendments set out that local employees may speak at a local public body or school board hearing during public comment.  Reconvened session action:  The Governor’s amendments were approved by the House but rejected by the Senate.  The bill now returns to the Governor in the form in which it passed the General Assembly.

HB 585 (VanValkenburg) requires, except for those middle and high school students with significant cognitive disabilities who participate in an alternate assessment, each student in middle and high school to take only those end-of-course Standards of Learning assessments necessary to meet federal accountability requirements and Virginia high school graduation requirements, among other provisions. The Governor’s amendment proposes substitute language that requires the Secretary of Education and Superintendent of Public instruction to convene a workgroup of appropriate stakeholders to revise the Virginia Standards of Learning (SOL) summative assessments of proficiency. The workgroup shall make a report to relevant General Assembly Committees by November 1, 2023. VACo supports changes to educational programs and standards that rely less on standardized testing and more on critical thinking skills such as performance-based assessments. VACo opposes efforts to impose additional standardized testing burdens on students and school staff.  Reconvened session action:  The General Assembly accepted the Governor’s amendments.

HB 873 (Greenhalgh) requires, in the case of any public elementary or secondary school in which a school resource officer (SRO) is employed, the threat assessment team for such school to include at least one such SRO.  The bill also requires the chief local law-enforcement officer for any local school division in which a public elementary or secondary school does not employ a SRO to designate a law-enforcement officer to receive, either in-person or online, the school safety training for public school personnel conducted by the Virginia Center for School and Campus Safety in accordance with relevant law and requires such officer to serve as the law-enforcement liaison for the school administrator in such a school who has also received such training as prescribed by relevant law. The Governor’s recommended amendment specifies that a law-enforcement liaison on a threat assessment team for a school without an SRO serve “in each public elementary or secondary school that does not employ a [SRO].” The intent of this language is to clarify that a law enforcement liaison should be serving on the threat assessment team for a school in which an SRO is not employed.  Reconvened session action:  The General Assembly accepted the Governor’s amendments.

HB 987 (Tran) requires program information regarding Medicaid be made available in a manner that is accessible to individuals with limited English proficiency and individuals with disabilities, when doing so is a reasonable step to providing meaningful access to health care coverage.  The bill requires websites maintained by the Department of Medical Assistance Services and state agencies that provide program information to include information regarding how individuals may receive language access services and auxiliary aids services.  The Governor’s amendments expand this requirement to include local government or state agency contractor websites that provide program information.  Reconvened session action:  The General Assembly accepted the Governor’s amendments.

As passed, SB 192 (Mason) expands the number of individuals who may be appointed as a local health director to include an individual with a master’s or doctoral degree in public health and three years of public health experience, or an individual who is otherwise qualified as determined by the Commissioner of Health.  Currently, a local health director must be a licensed physician.  The Governor’s amendment removes the language regarding public health credentials and experience, so that a local health director could be either a licensed physician or otherwise qualified as determined by the Commissioner.  Reconvened session action:  At the request of the patron, the Senate rejected the Governor’s amendments due to concerns that removing the language regarding public health education and experience made the bill overly broad.  This bill now returns to the Governor in the form in which it passed the General Assembly.

SB 281 (Ebbin) exempts a manufacturer, factory branch, distributor, distributor branch, or factory or distributor engaged in the manufacture or distribution of transit buses from the requirements of obtaining a license from the Department of Motor Vehicles to engage in business, among other provisions. VACo supported this bill, which clarifies existing code to continue to allow Virginia to participate in the Federal Transit Agency’s (FTA) bus procurement program.  The Governor’s recommended amendment specifies that the legislation applies to “transit buses.”  Reconvened session action:  The General Assembly accepted the Governor’s amendments.

SB 591 (Hanger) is intended to bar sales of certain synthetic cannabis products by modifying the definition of “marijuana” to include any substance exceeding certain concentrations or per-serving or per-package amounts of tetrahydrocannabinol (THC).  The bill also targets products that appear to be marketed to children by directing the Virginia Cannabis Control Authority to promulgate regulations that would prohibit the production and sale of retail marijuana and retail marijuana products that depict or are in the shape of a human, animal, vehicle, or fruit.  The Governor’s proposed substitute includes these proposed regulatory prohibitions on products in human, animal, vehicle, or fruit shapes, and bars sales of any product containing THC to persons younger than 21, effective October 1.  The amendments also bar sales of products with THC concentrations greater than 0.3 percent or products containing synthetic delta-8 THC, also effective October 1.  The Governor’s proposal also establishes new penalties for possession of marijuana.  Currently, possession of not more than one ounce is legal, and possession of amounts in excess of one ounce triggers a civil penalty of $25; possession of more than one pound is a felony.  The Governor’s substitute would make possession of more than two ounces but not more than six ounces a Class 2 misdemeanor, and possession of more than six ounces but not more than one pound a Class 1 misdemeanor.  Reconvened session action:  After extensive floor discussion of the appropriate procedural steps to enable further work on the Governor’s substitute, the Senate opted to re-refer the bill to the Senate Rehabilitation and Social Services Committee, which heard the original bill during the regular session.  Although this committee is not expected to meet (and in this case, the re-referral to committee would effectively kill the underlying bill for the year), members discussed the possibility of the Governor submitting a new bill on the issue during the special session.

SB 666 (Petersen) redefines “lost profits” for the purposes of determining just compensation in eminent domain cases.  The Governor’s recommended amendment adds some helpful language regarding claims where the impact to a property is for less than 7 days.  The Governor’s amendments also add an enactment clause providing that the bill does not apply to certain condemnation proceedings filed prior to July 1, 2022.  Reconvened session action:  The General Assembly accepted the Governor’s amendments.

SB 694 (Obenshain) makes a series of changes to statutes governing the condemnation process.  The Governor proposes to add an enactment clause stipulating that the bill does not apply to certain condemnation proceedings filed prior to July 1, 2022.  Reconvened session action:  The General Assembly accepted the Governor’s amendments.