Here is the most recent schedule of outreach meetings:

The most up-to-date information on the meeting schedule is available here.

DEQ’s most recent “outreach” meeting took place in Henrico County on April 17, where it was announced that U.S. EPA has extended several deadlines for certain critical functions to be performed by state and local governments. These are all functions U.S. EPA deems to be important to the mid-point assessment. For example, under the original schedule, states in the Chesapeake Bay watershed were expected to submit their final Watershed Improvement Plans (WIPs) to U.S. EPA by December 2018.  That deadline has been extended to April 15, 2019.

These key actions with revised deadlines are included in the chart below: 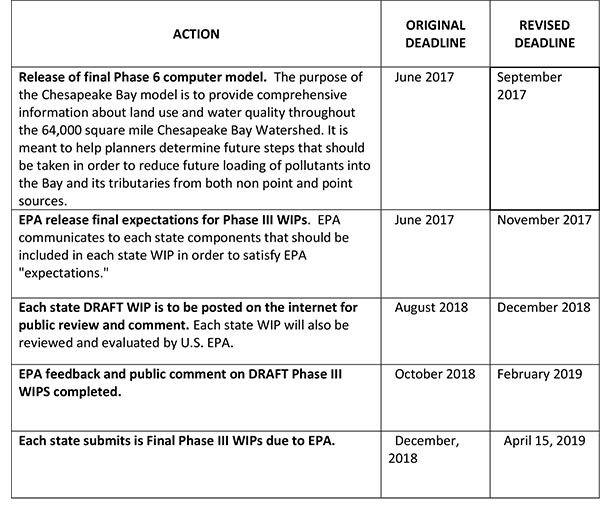 The Chesapeake Bay Program was established in 1983 through an agreement reached among the states of Virginia, Maryland, Pennsylvania, the District of Columbia, and U.S. EPA.  EPA manages the Program from the Program office in Annapolis, MD. The Program is overseen by the Chesapeake Bay Executive Council, which now consists of the Governors of all states in the Bay’s watershed (Virginia, Maryland, Pennsylvania, New York, Delaware, and West Virginia), the Mayor of Washington, D.C. and the EPA Administrator.

At LGAC’s most recent meeting on March 23 and 24 in King George County, the President’s budget proposal was discussed at great length. In response to concerns about elimination of the Program’s funding, this letter was sent by LGAC to members of the Chesapeake Bay Executive Council.

RRMM Architects announces merging of forces with the Lukmire Partnership