On September 18-19, the Virginia Board of Education (VBOE) met to continue its discussion of priorities and goals for revisions to the Standards of Quality (SOQs), which set minimum requirements that must be met by all local school divisions for K-12 education in Virginia. This was the penultimate meeting of the Board before it takes final action in October and either recommend or prescribe the revised SOQs to the Governor and General Assembly. The latest set of proposals contain significant changes that include increased local flexibility, but still could impose significant fiscal impacts both to state and local governments if enacted.

As previously reported, VBOE reviews the SOQs every two years and typically submits its recommendations for consideration by the General Assembly in September or October as mandated by Article VIII, Section 2 of the Constitution of Virginia. The SOQs have wide ranging fiscal impacts to localities as they determine a variety of factors, including school staffing ratios, distribution of state aid, and other requirements for public education. VACo staff and/or members of the VACo Education Steering Committee participated in all four regional meetings held by the Board in May, as well as submitting formal comments on the process in June, and attending regular meetings of VBOE. Throughout this process, VACo has stressed the importance of maintaining and creating local flexibility as well as restoration of state funding to pre-Recession era levels of support.

As part of VBOE’s Comprehensive Plan: 2018-2023, a large focus of the proposals under consideration is devoted to promoting equitable learning environments and supporting teachers in a manner that leads to higher rates of recruitment and retention. Many of the proposals are continuations of VBOE’s 2016 recommendations, including the elimination of the “support position cap,” which if enacted, would provide approximately $370 million in additional state funding to localities for existing support staff positions that are currently completely funded by local efforts. However, some of the new proposals would require additional expenditures by both state and local government.

VBOE’s most recently revised proposal creates an Equity Fund, which among other functions moves the At-Risk Add-On program into the SOQs. At-Risk Add-On funds provide local school divisions with additional state support for student instruction based on concentrations of student poverty. This is currently a voluntary program that school divisions can opt into and contains required local effort (RLE). The proposal increases state funding by $131 million and allows flexible spending of these funds for existing academic remediation and support services as well as for compensation of teaching positions. The proposed standard would still require additional compensation for the deployment of experienced, proficient teachers to classrooms in schools with high concentrations of poverty. This new fund would likely require a local contribution of $79.5 million.

Another proposal would also move the K-3 Class Size Reduction program into the SOQs and allow larger class sizes for experienced teachers who are provided compensation adjustments. Current SOQs mandate the maximum pupil to instructor ratio at 24:1. The Reduction program lowers this ratio based on the three-year average percent of free lunch eligible students per school and provides additional state support to do so. The program is currently voluntary, though according to FY 2018 data, all but 5.3% of funds were expanded, indicating that most, but not all school divisions participate in the program. The proposed changes would make participation by all school divisions mandatory and allow for compensation adjustments to experienced teachers. Local fiscal impact would be felt in non-participating divisions.

Another new proposal would establish a Teacher Leader program, which would expand existing state funding of the Teacher Mentor program from approximately $1 million to $100 million and require additional compensation for teachers providing mentorship. The new program would require school boards to staff teacher leadership and mentorship programs at a ratio of one mentor position per 15 first and/or second year teachers, and one position for every 50 teachers with three or more years of experience. In addition to the staffing ratios, the proposal would also require release time from other duties for teachers to receive mentoring. This time would need to be covered by substitutes or other instructional personnel. The estimated local contribution required for this proposed standard would be $84.3 million.

Additional new proposals include: a) changing staffing requirements for English Learner teachers to differentiate based upon the proficiency level of students in school divisions as opposed to the existing ratio, which is based on total numbers of English Learner students, b) removing school nurse, school social worker, and school psychologist positions from the SOQ support position category creating local flexibility for how these positions are filled while also guaranteeing state funding support, c) shifting the Early Reading Intervention Program into the SOQs and basing reading specialist staff ratio/deployment on the number of students failing the third grade Reading assessment, and d) creating state and regional Work-Based Learning Coordinators to help fulfill the goals of the Profile of a Virginia Graduate to foster connections between school divisions and the business community to advance work-based learning opportunities.

Funding of SOQ requirements is met by a combination of state and local resources. Local ability to pay for standards with required local effort (RLE) is determined by the composite index formula, which is updated every two years to account for the latest available state and local values in real property, adjusted gross income, retail sales, average daily membership of students, and total population.

All the new proposals under consideration by VBOE in their current form would involve a combination of state funding and RLE. Some localities may already have committed to funding some of the proposed requirements, and as such, would be eligible to receive new additional state funding support should they be enacted. However, this may not be the case for all of the proposals and for all localities. A chart detailing the estimated state and local fiscal impact of the proposals can be viewed below: 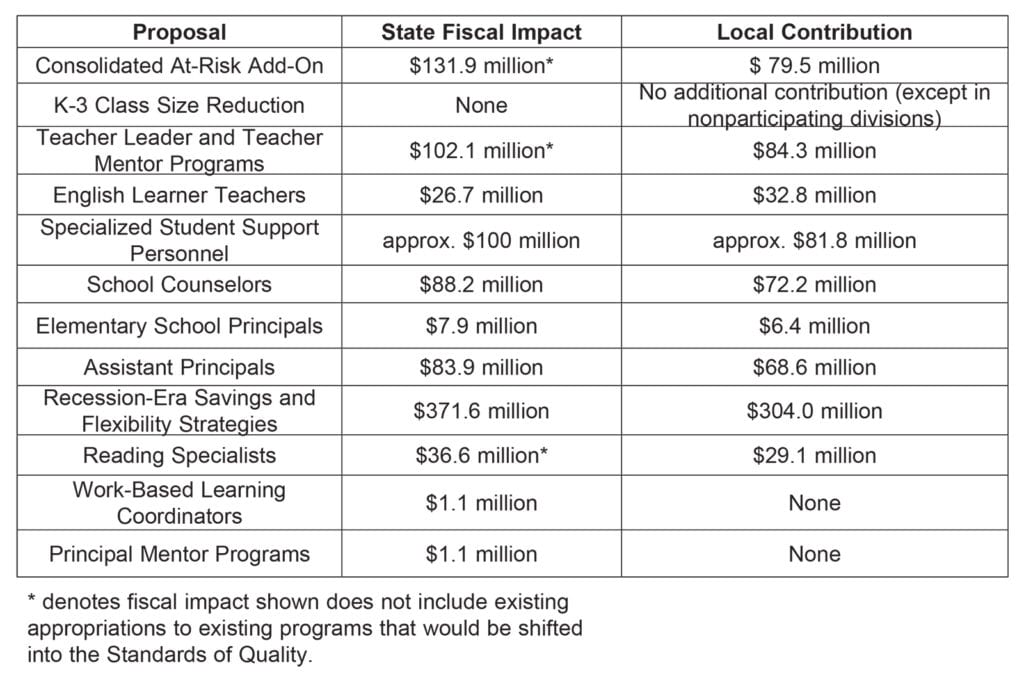 VBOE continues to consider whether to recommend the SOQ revisions to the Governor and General Assembly or to issue them as prescriptions. VBOE President Dan Gecker indicated during the meeting that they have reached out to the Attorney General’s office for additional clarification as to the constitutional options available to VBOE in this regard. If they chose to issue the latter, the General Assembly would potentially either adopt the revised SOQs as prescribed or to make alterations in the biennial budget. VBOE meets next on October 17, at which point they hope to have this information and take a final vote on the proposed revisions of the SOQ. If you are interested in submitting public comment to VBOE, information on how to do so may be found here.

In other VBOE related news, VBOE received a report detailing Rebenchmarking of the Direct Aid to Public Education Budget for the 2020-2022 Biennium. The rebenchmarked budget represents the state cost of continuing the current Direct Aid programs into the next biennium, with updates to the input data used in the funding formulas that determine the cost of the programs. This technical process occurs every two years and incorporates the latest data to reflect changes in enrollment, salaries, support costs, inflation, and other factors. This process impacts localities as it helps determine RLE. The initial estimated state cost of rebenchmarking for the upcoming biennium was stated to be $595.7 million.

Full meeting materials and minutes of VBOE and the VBOE Committee on the Standards of Quality can be found here and here respectively.