Virginia counties are beginning to receive distributions from settlements in litigation resulting from the opioid crisis.  Tony McDowell, Executive Director of the Opioid Abatement Authority, met with VACo staff earlier this month to provide an update on the Authority’s plan for distributing the state’s portion of the settlement dollars.  Below is an overview provided by Mr. McDowell of the flow of settlement dollars and next steps for the Authority.  Mr. McDowell will be participating in a webinar for VACo members on October 12 at 10am.  To register, please click here.

A Quick Look at the OAA September 2022

Three major opioid settlements have resulted in payments flowing to Virginia. The first was from McKinsey, a consulting/marketing company, for just under $12M, which is now provided in the Opioid Abatement Fund. The second settlement was part of a nationwide agreement worth $26 billion with three wholesale distributors of prescription opioid medications (McKesson, Cardinal Health, and AmerisourceBergen). The third was with opioid manufacturer Janssen Pharmaceutical.

The Office of the Attorney General worked with local government attorneys/counsel to craft a MOU describing how to allocate opioid settlements. The agreement includes a formula for distributing the proceeds based on a measure of harm per capita to communities across Virginia. All 133 counties and cities in the Commonwealth signed this MOU. At the same time this settlement and the MOU were being finalized, the General Assembly passed bipartisan legislation that created the Opioid Abatement Authority as an independent body of the Commonwealth. 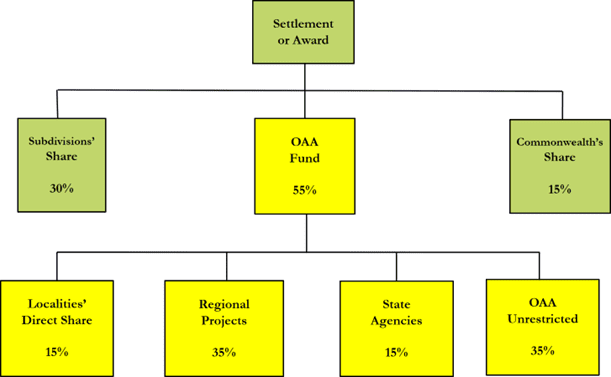 As noted on this flowchart 30% of the total Virginia settlements will go directly to localities. For instance, localities already received (July 2022) the first of two payments from the distributors’ settlement. That July payment was for the 2021 amount. Another similar payment will be coming to the localities soon (expected during September) to cover the 2022 payment. Future payments of this type will be made on or about July 30 each year from 2023 through 2038 (18 years total).

Similarly, Janssen will provide one payment to the cities and counties this year (September/October expected timeframe). The total Janssen payout will take ten years, as opposed to 18 years with the distributors, but Janssen is providing the first four years’ payments all in the first year. That means localities will receive one large payment from Janssen that covers the 2022, 2023, 2024, and 2025 amounts. Localities will then resume receiving single year payments from Janssen on or about June 1 each year from 2026 through 2031.

These payments are coming directly to the localities without flowing through the OAA. For that reason it is important for local officials to be fully informed about the allowable uses and limitations for these funds (as determined by the Court ordered settlement agreement). Localities’ legal counsel should be able to provide that information in detail.

Funds that are deposited in the OAA fund will be distributed as noted in this chart. All funds provided by the Authority to localities and to state agencies must be used to abate and remediate the opioid epidemic. A full definition of what this means is provided within the settlement agreement, but in general most efforts that prevent, treat, and support recovery from opioid use disorder (and co- occurring addictions and mental illness) are covered. Localities can expand existing programs or implement new programs, but no supplanting of existing expenditures is allowed. No indirect costs are allowed. Considering that a minimum of 15% will be allocated to participating localities and at least another 35% will be provided to regional efforts with participating localities, this means that a total of at least 50% of the Opioid Abatement Fund will be distributed out to local governments.

Based on the current court-approved settlements, counties and cities will be receiving payments each year until at least 2038 from the defendants in these cases, with the payments coming directly from the settlement administrators.

In addition, counties and cities (and state agencies) will be eligible to receive additional funding from the OAA, both for local and regional projects.

The funds available are substantial and represent a once-in-a-generation opportunity to abate and remediate the opioid and addiction crisis.

Next Steps for the Opioid Abatement Authority

Significant work streams for the OAA include setting up an office, launching a communications and outreach effort, developing a funding cycle that includes a timeline for making financial awards and grants, establishing a method of tracking projects and collecting data, and building a “toolkit” to assist localities and other stakeholders with identifying proven, evidence-based programs that can be used to abate and remediate the opioid epidemic in Virginia. The OAA’s goal is to have all of these efforts well underway by the end of the calendar year, with the ability to begin distributing awards and grants by Summer 2023.