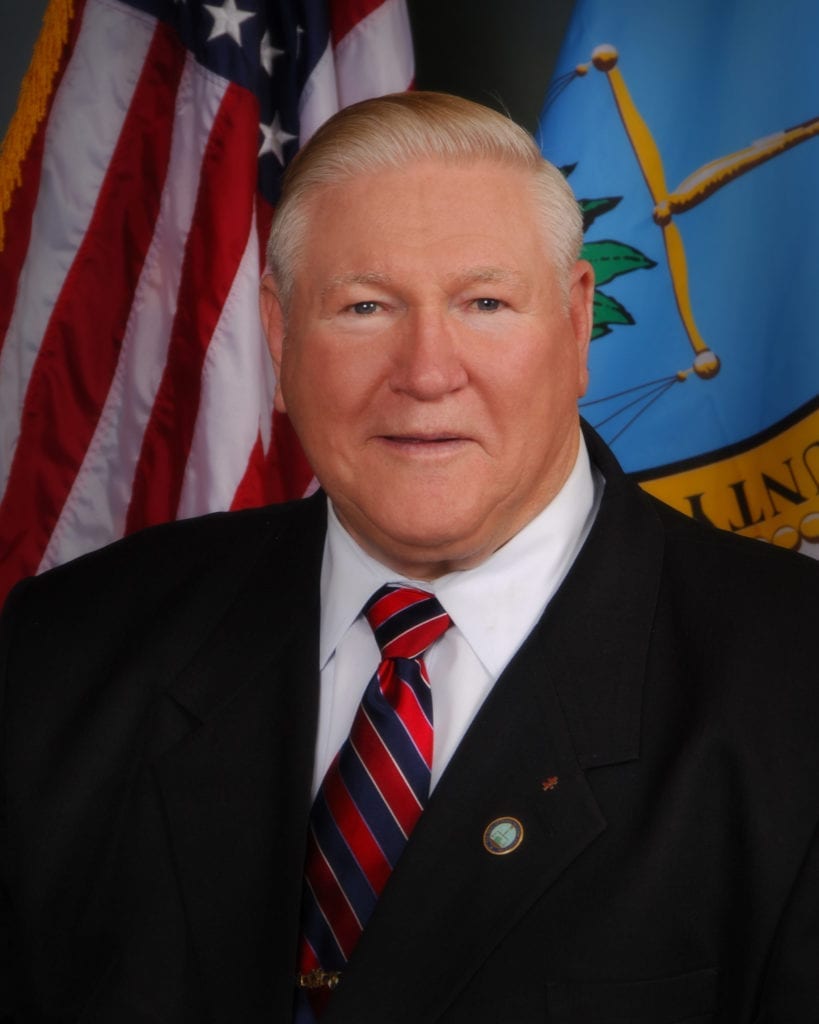 Neabsco District Supervisor John D. Jenkins passed away on February 6, 2019. Jenkins served on the Board of County Supervisors for more than 36 years, making him the longest-serving member of the board.

“Prince William County mourns the loss of one of its best,” said Chairman of the Board of County Supervisors Corey Stewart. “For almost 37 years, Supervisor John Jenkins served his community with honor, integrity, and worked tirelessly to improve the lives of the residents in the Neabsco District. He not only loved this country, but he loved this community.”

Jenkins, a retired U.S. Army lieutenant colonel who served two tours in Vietnam, moved to Dale City in 1973 and soon thereafter joined the Dale City Civic Association as the Forestdale representative. In 1982, he was appointed to the Board of County Supervisors to fill the Neabsco District seat vacated by James McCoart.

Since taking office, Jenkins successfully pushed for the construction of the Dale City Recreation Center, the James. J. McCoart Administration Center, the G. Richard Pfitzner Stadium, the Potomac and Rappahannock Transit Center, the county’s Boys’ Home and Girls’ Home, the Hilda Barg Homeless Prevention Center, the Gar-Field Police Station, the Chinn Park Regional Library and Fitness Center, the Freedom Aquatics Center and about a dozen other buildings across the county, including fire stations, schools and senior centers.

In addition to advocating for public spaces, Jenkins always told his constituents that he would work for better education, public safety, transportation, human services and economic development. He advocated for roads and other infrastructure and was a primary proponent for building the Prince William Parkway. He also pushed the initiative to provide police officers with county-issued bullet proof jackets and advocated for the motorcycle traffic unit.

Between 1985 and 1986, Jenkins promoted the building and opening of the Dale City Mini Library. In 1993, at Jenkins’ prompting, the county allocated $1.44 million in additional funds for Prince William County Schools.

A life-long civil and human rights supporter, Jenkins once asked the board to initiate a local investigation of a Dale City restaurant for refusal of service based on race. In 2018, Jenkins supported a vote on the board to make June “LGBTQ and More Pride Month.”

In 2009, a tribute to Jenkins was entered into the U.S. Congressional Record by Congressman Connolly for Jenkins’ dedication to the community and his work with the Scouts. Jenkins was a recipient of the Occoquan District Good Scout Award by the National Capital Area Council of the Boy Scouts of America. “He has taught generations of Scouts the nobility of public service and the great potential that it holds to help one’s fellow man,” stated the tribute.

Jenkins received numerous awards over his years of service including the Robert W. Baker Award for “outstanding contributions in promoting regional planning and development.” In 2010, Jenkins was honored the Blue Victory Award by the Manassas & Manassas Park Democrats. In 2015, the Virginia Railway Express honored Jenkins for his key role in establishing the commuter rail service by having his name placed on the front of a VRE locomotive. In 2017, Gar-Field High School honored Jenkins for his support of athletic and academic programs as booster club president, parent and county supervisor.

Jenkins served on the board for more than eight terms. He is survived by his wife Ernestine, three sons, 14 grandchildren and several great grandchildren.