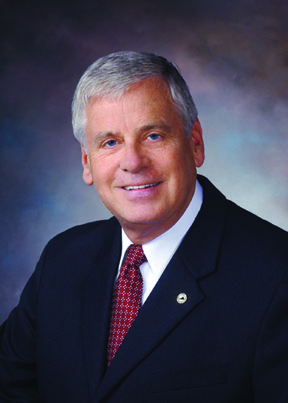 It was Dean Lynch who made the announcement last week at the VACo County Officials’ Summit. Nearly 200 local and state leaders were in a Hotel Roanoke conference room when Dean asked for a moment of silence for Jim Campbell, who had passed away earlier that morning.

It was apropos that it was Dean who shared the sad news. Jim and Dean had worked together since 1995, and Dean succeeded Jim as VACo Executive Director in 2016. Jim mentored Dean. Jim and Dean had traveled the state together countless times, and what a treat it would have been to hear those road trip conversations. The two were good friends.

It was appropriate that this year’s County Officials’ Summit was not only filled with robust legislative news and information, and seeping with rich and meaningful discussions, but also bursting with old local government friends seeing each other again, and the joy that comes with such reunions. Jim loved visiting with his county colleagues and considered many of them friends.

And it was significant that the announcement came in Roanoke County, which was near his beloved Virginia Tech. Jim spent a lot of time in the area, rooting on the Hokies, and enjoying many football victories.

“It has been an honor to serve the 95 counties of Virginia over the past 25 years,” Jim said in his retirement press release. “I’ve made many friends along the way and will cherish each friendship. I am proud of what we’ve accomplished during my tenure and believe the association is primed to launch to greater heights in the coming years.”

Jim, with the foundation you laid – we took the baton and have worked hard to launch VACo to greater heights.

In that moment of silence at the Summit, which lasted a few dozen heart beats, it’s very possible that many of those with bowed heads remembered Jim as a kind, happy and generous man. Because above his many professional accomplishments and successes – Jim was loved because he was so lovely.

Rest easy Jim. You will be missed.