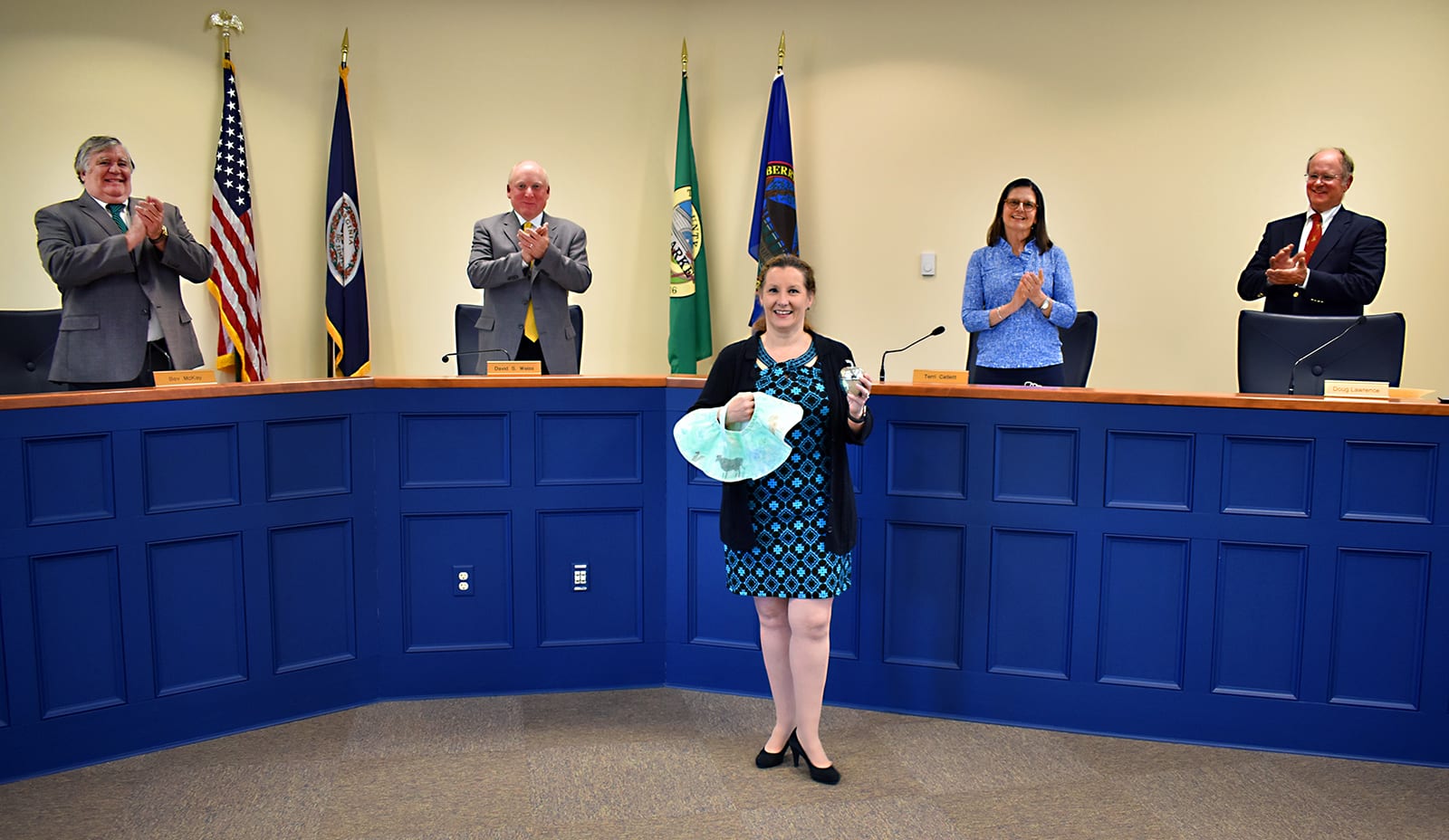 A recent Clarke County Board of Supervisors meeting concluded with gifts and expressions of gratitude for Berryville District representative Mary L.C. Daniel, who officially left the Board on May 1 in order to begin her new career as General District Court Judge for the 26th Judicial District. The Virginia General Assembly appointed her in March, and she begins her six-year term on June 1. Clarke County Supervisors (standing from left behind dais) Vice Chair Bev McKay, Chair David Weiss, Terri Catlett, and Doug Lawrence give Mary Daniel a round of applause. Article and photos provided by Clarke County

BERRYVILLE, VA — Virginia’s General Assembly on March 3 appointed lawyer and Berryville resident Mary L.C. Daniel a General District Court judge for the 26th Judicial District. She begins her six-year term June 1, 2020. Daniel has served as the Berryville District representative on the Clarke County Board of Supervisors since January 2016 and officially leaves the Board on May 1.

Board chair David Weiss said, “Our colleague is leaving us for an extraordinary opportunity, and we could not be more pleased for her. We’ve enjoyed working with Mary, who has been a tremendous asset to the Board while representing Berryville residents.”

The Board accepted Daniel’s resignation during its March 17 meeting and has 45 days after Daniel leaves to appoint a Berryville resident to fill the district vacancy until a special election on Nov. 3. Six residents have applied for the temporary appointment, and the Board expects to make an announcement in mid-May.

As a judge for the 26th Judicial District, Daniel will preside over cases in Clarke, Frederick, Page, Rockingham, Shenandoah, and Warren counties as well as the City of Winchester. Daniel has practiced law since 1993, beginning in Martinsburg, W.Va., before moving to Berryville in 1996, when she joined Hobert, Kerr & Perka P.C. Since 2017, she has been a partner at Central Atlantic Legal Group in Winchester.

Daniel was serving her community in 1999 as a member of the Clarke County Planning Commission. She served on the Commission until March 2008. In October 2007, Daniel was appointed to fill a Ward 3 vacancy on Berryville Town Council. She was then elected to two consecutive terms.

Daniel ran for the Board of Supervisors in 2015, was elected, and began her term in January 2016. She has served as Board liaison to the Clarke County Board of Septic & Well Appeals, the county’s Broadband Implementation Committee, Clarke County Library Advisory Council, Clarke County Planning Commission, Clarke County Sheriff’s Office, Josephine School Community Museum Board, Legislative Liaison and High Growth Coalition, Northwestern Regional Juvenile Detention Center Commission.

Daniel considers her participation in the selection of a new County Administrator in 2019 to be her most contribution to the Board and county residents. “The County Administrator will have more impact [on the county] than any other single action I’ve taken as a Supervisor.”

Daniel said, “I love working with a Board that puts Clarke County first. I have never once thought any Board member was acting in his or her own interest. David Weiss is a consensus builder, and he works hard to do everything cooperatively. Frankly, he works hard for Clarke County. Period.”

She continued, “It has been an honor to serve alongside David, Bev McKay, Terri Catlett, Barbara Byrd, and Doug Lawrence. One of the things that makes Clarke unique is our inherent expectation that things will be done by consensus at all levels whenever possible. You simply don’t see that in other communities.”

True to her commitment to Clarke County, Daniel missed her second day of judge training in Richmond in order to attend the April Board of Supervisors meeting that included two public hearings for the Tax Rate and Fiscal Year 2021 Budget. “It was too important not to be there,” Daniel said.