On January 30, the House Counties, Cities and Towns Committee defeated HB 1949 (Poindexter), which provides that a county shall not hold a referendum proposing the imposition of a food and beverage tax more often than every three years. VACo opposed the bill, which passed through subcommittee on a vote of 5-3 and then failed to report out of full committee on a vote of 12-6. VACo’s policy supports equal revenue raising authority for counties.

On February 2, a House Education Subcommittee tabled HB 2394 (Webert), a bill supported by VACo that would have required the Board of Education to establish a process for a local school division to challenge the computation of its Local Composite Index (LCI.) The majority of subcommittee members expressed opposition to any measure threatening to reopen the LCI for any kind of changes that might result in “winners and losers.” Meanwhile, the Senate has approved SJR 288 (Vogel), a study resolution directing the Department of Education to analyze the utilization of land use assessment as a factor in computing the LCI. This study resolution will now crossover to the House, which has been against any initiative threatening to reopen LCI. Last week, the House Rules Committee’s Studies Subcommittee rejected HJR 514 (Webert), which was identical to SJR 288.

SB 1054 (Hanger) was reported out of the Senate Finance Committee on February 3 with an amendment requiring that funding needs be met before the bill can go into effect. The bill places the State Executive Council (SEC) under the Administrative Process Act (APA), which has been a longstanding VACo policy. Placing the SEC under the APA provides local governments and other stakeholders a structured process in which to review, respond and understand fiscal impacts to any proposed policies the SEC considers. VACo supports this bill and will update on its progress.

The bill could have significant fiscal impacts for local governments, particularly for counties that fully or partially fund community services boards (CSB). Under this legislation, CSBs will have to attract and hire a workforce that meets additional certification mandates, replacing many existing employees who have years of knowledge but would not fall under the new certification standards. The bill has a five-year enactment clause. VACo opposes the bill and will continue to work on it as it goes to the Senate floor for debate.

SB 1049 (McDougle), a bill that reduces state reimbursement from 50 percent to 25 percent for the construction, enlargement or renovation of regional jails, was amended by the patron to not impact existing regional jails, but rather make this a policy for any new regional jail authorities. VACo opposed the original bill and appreciates the amendment. Regional jails will still have the flexibility to work with money committee members in the state budget process to secure up to the 50 percent reimbursement for capital needs. The Governor’s proposed budget language limits the reimbursement rate to 25 percent for FY 2016.

Multiple VRS related bills that place unfunded mandates upon localities are no longer under consideration or have a clause attached that they will not become law unless funded by the state. However, several of these bills are still up for consideration.

VACo opposes HB 1659 (Rust), which provides an increase in the monthly retirement allowance for certain VRS retirees. The bill would have an annual cost of $2.6 million total for all political subdivisions and would increase the unfunded teacher pension liability by over $38 million. VACo also opposes HB 1377 (McQuin), which expands the recipients of the health insurance credit currently being provided to retired teachers to all retired employees of local school divisions. The bill would cost localities $8.4 million per year and increase the health insurance credit’s unfunded liability by $98 million.

HB 2178 (Poindexter) | SB 1162 (Watkins) allow school divisions the option of establishing and administering their own 403(b) plans for hybrid retirement program employee voluntary contributions and employer matching funds. Employees of such school divisions would have the option of using the local 403(b) plans for voluntary contributions. The bill has a delayed effective date of July 1, 2016.

HB 1969 (Jones) directs VRS to develop a proposal for a cash balance retirement plan based on the Kentucky plan and including other options and provide the proposal to the General Assembly no later than November 1, 2015. This is just a requirement to produce a proposal, but VACo will monitor as any cash match plan is likely to be more expensive for employers than the hybrid plan.

SB 1063 (Obenshain) allows public charter schools to designate whether they will participate in VRS. One potential issue with the legislation is that when charter schools leave the VRS system, they can leave behind an unfunded liability.

HB 1890 (Jones) simplifies and clarifies the purchase of prior service program and makes it more cost neutral to the fund and more in line with other states’ programs. The changes will include cost savings to employers.

A full list of VRS related bills is available by clicking here.

Changes to administration of Line of Duty Act proposed

HB 2204 (Jones) revises the Line of Duty Act (LODA) by codifying provisions that are currently in the Appropriation Act, transferring overall administration of the Act and eligibility determinations to the Virginia Retirement System, transferring administration of health insurance benefits under the Act to the Department of Human Resource Management and providing for an administrative appeal process for employers. The bill becomes effective July 1, 2016. The bill includes provisions from the December 2014 JLARC study of LODA. VACo supports the changes to the administration of the program and the appeal process for employers. The bill is likely to be considered this week in the House Appropriations Committee.

SB 1440 (Ruff) and HB 2330 (Kilgore) make multiple changes to the structure and operations of the Tobacco Indemnification and Community Revitalization Commission. The bill renames the Commission as the Tobacco Region Revitalization Commission and requires it to contract with a manager with respect to Commission loans, grants, and other distributions of money. The bill eliminates future appointments of six non-legislative citizen members, all tobacco producers and requires 13 of the remaining 25 Commission members to have experience in particular fields. The bill requires the Commission to adopt policies governing the Tobacco Region Opportunity Fund; to require a dollar-for-dollar match from entities receiving grants among other operational changes. The bill also establishes the Virginia Tobacco Region Revolving Fund, the assets of which are to be used to make loans to local governments for the financing of any project. The bill empowers the Virginia Resources Authority to administer the Fund.

SB 1381 (Stanley) amends the definition of “private animal shelter” as a facility “operated for the purpose of finding permanent adoptive home and facilitating other lifesaving outcomes for animals.” Representatives from the Animal Control Officers Association have expressed concern about how public shelters may be over-run if private shelters are only allowed to “find permanent adoptive homes.” By a 10-3 vote, Senate Agriculture, Conservation and Natural Resources Committee reported the bill on January 29. SB 1381 now awaits a vote by the full Senate.

SB 693 (Martin) creates a program that allows any person or any organization throughout the state, such as an animal shelter or humane society, to trap and sterilize a feral cat before returning it to the site where it was trapped, or to another suitable alternative site. By a 10-4-1 vote, the bill was reported by the Senate Agriculture, Conservation and Natural Resources Committee and now awaits a vote by the full Senate. 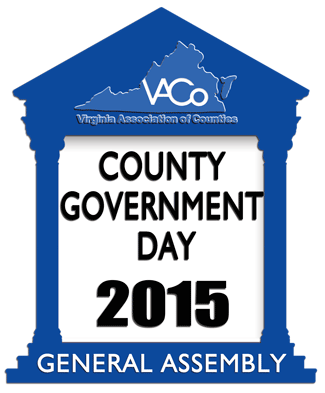 The Virginia Association of Counties invites county officials to VACo County Government Day at the General Assembly on February 5 at the Richmond Marriott.

Also please plan on joining VACo members at the Rural Caucus Reception and Dinner on February 4.