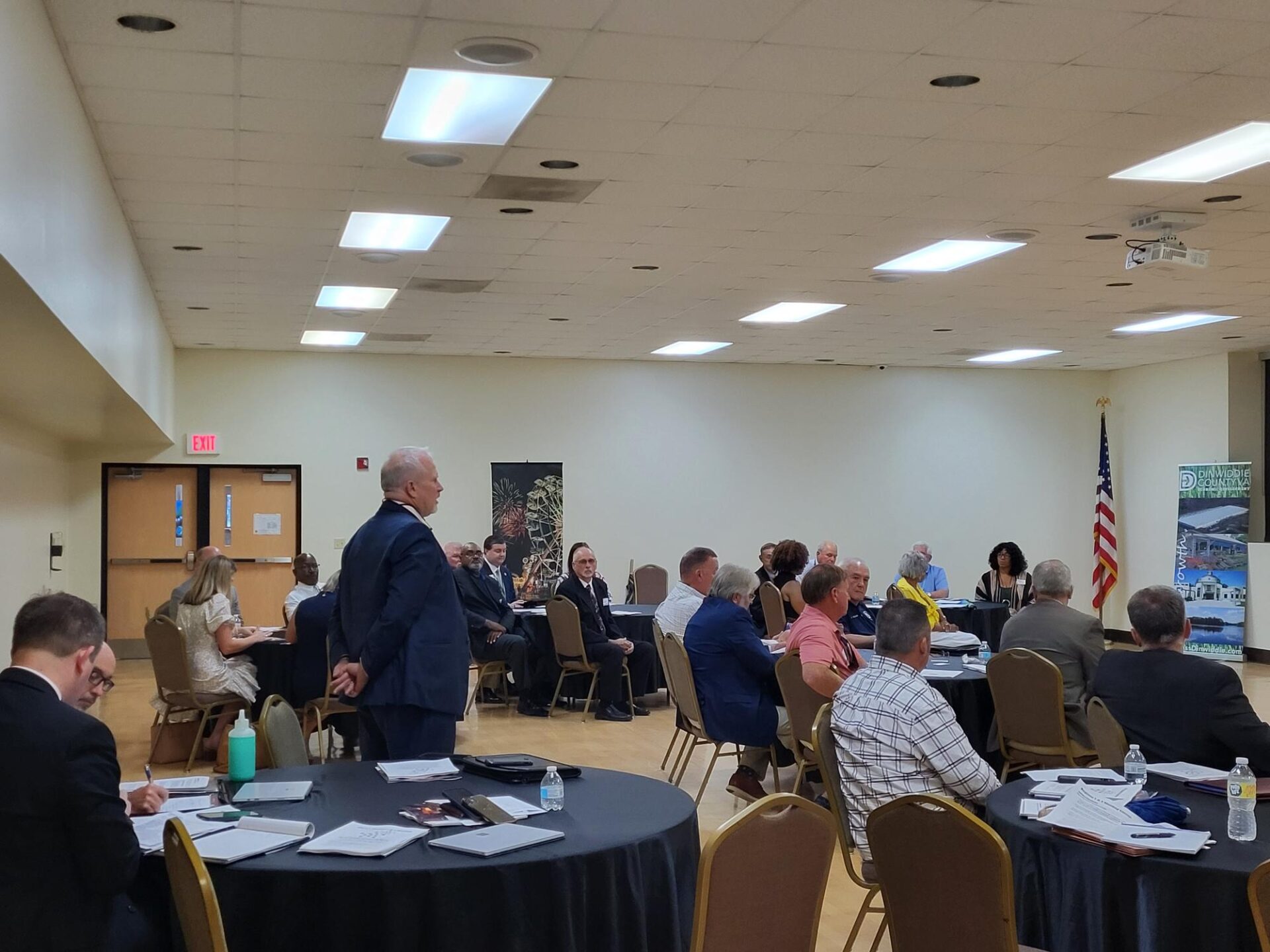 Dinwiddie County hosted representatives of VACo Regions 1 and 4 and three members of the area’s General Assembly delegation on July 21 for VACo’s fourth regional meeting of the year.  Dinwiddie County Chairman and former VACo President Harrison Moody set the stage for a collaborative conversation by offering a warm welcome to the County.

Representatives of the 11 counties who participated in the meeting shared their major challenges and priorities for legislative action as part of a roundtable discussion.  Issues raised included a strong interest among several attendees in additional options to raise revenues for school capital projects, through continued state appropriations as well as by allowing interested localities to impose a 1 percent sales tax for school capital projects if approved by referendum (authority that has been granted to nine localities).  Several county representatives highlighted the strain on local law enforcement imposed by overcrowding at state hospitals, which has resulted in lengthy waits in emergency rooms with individuals subject to temporary detention orders.  Other common themes included the challenges in recruiting and retaining volunteer fire and EMS personnel in rural areas; the need for transportation improvements on major corridors as well as the need to address overdue road maintenance (such as ditch cleaning); the need for full state funding of Constitutional offices; economic development (to include the infrastructure needed to support growth); and workforce challenges in the public sector, including public safety staff and teachers.  Several county representatives expressed their interest in encouraging young people to remain in the area.

Delegate Emily Brewer provided updates on major actions taken by the 2022 General Assembly and her priorities for the upcoming 2023 session and responded to items raised by counties during the roundtable discussion.  She echoed the importance of encouraging younger residents to remain in rural communities, noting her efforts to refine the G3 workforce development program to target the needs of particular regions, and encouraging members to participate in the Governor’s Summit on Rural Prosperity, which will be held October 12 and 13.  She highlighted several successes in the recently-adopted state budget, including additional funding for law enforcement and a large infusion to the Virginia Retirement System to improve the funded status of the plans.  A priority for the upcoming session is ensuring that rural communities can benefit from the Smart Scale program, as well as continued work on behavioral health.  Delegate Kim Taylor underscored the importance of economic development for the region, and indicated her particular interest in working to improve opportunities in agriculture.  Delegate Otto Wachsmann noted that TDOs have been cited as a top priority issue in his meetings with sheriffs.  He applauded the work of electric co-ops in the deployment of rural broadband.

Kevin Massengill, Dinwiddie County Administrator, and Tammie Collins, Deputy County Administrator, Planning and Community Development, made a brief presentation about economic development in the County, in particular the County’s efforts to develop a home-grown workforce for local businesses.  The County’s Youth Workforce Development Initiative exposes students to job opportunities in the community, in partnership with the school system, community college, and local businesses.  Students are paid for their work through a combination of seed money appropriated by the Board of Supervisors, support from local businesses, and a grant from the regional community action agency.  Mr. Massengill provided an overview of the County’s relationship with the Virginia Motorsports Park, which is the largest tourist attraction in the area and generates revenue for the County through an admissions tax charged on each ticket.

VACo is grateful to Dinwiddie County for hosting a robust discussion and to Virginia Motorsports Park for allowing attendees to visit this important part of the region’s economy.  County representatives and legislators provided critical information that will help VACo develop its draft legislative program, and VACo appreciates their participation.