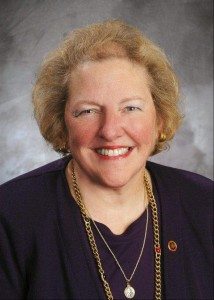 Q1. You spent a large part of your career working on Capitol Hill, first in the Senate and later in the House of Representatives.  What led you to run for office at the local level?
Penny Gross: I had the great good fortune to learn practical politics at the feet of masters – Senator Wayne Morse of Oregon and Senator Frank Church of Idaho.  Both Senators instilled in me an appreciation for people and their problems.  When Oregon Congressman Mike Kopetski decided not to run for a third term in the face of the Gingrich revolution, I decided it was time for me to put my own name on the ballot.  Fortunately, the voters of Mason District agreed.

Q2. You’ve been a leader on environmental protection in your time on the Board, chairing the Board’s Environmental Committee and the Potomac Watershed Roundtable, and serving on the Local Government Advisory Committee to the Chesapeake Executive Council.  What sparked your interest in environmental issues?
PG: Growing up in Oregon’s Willamette Valley, within an hour’s drive of the ocean and the mountains, environmental stewardship is in my DNA.  Family outings included picnics along the river in a local park; a favorite Sunday drive was into the mountains to the ancient lava fields; and evergreen trees made home green all year long.  At the Metropolitan Washington Council of Governments Board of Directors, I became involved in water issues – drought in the late 1990s, the development of the Chesapeake 2000 agreement, even wastewater and stormwater improvements.  Water quality and water quantity are hugely important to the future development of our region, and those issues impact nearly every community and county in the nation, as I have discovered as the vice chairman of NACo’s Environment, Energy and Land Use Committee.

Q3. You’ve also chaired the Board’s Personnel Committee for many years.  As the “Baby Boomers” retire, how can younger workers be encouraged to see local government as an attractive career option?
PG: Serving the public is a privilege, as well as a responsibility, at any level of government.  As VACo members know, the work gets done at the local level. Elected boards may change, but the policy implementation and “boots on the ground” work is done by ongoing staff, whether in human services, public works, public safety, or any of the myriad of other services.  A local government career offers advancement, stability, and professional and personal satisfaction, and most localities offer commensurate salary and benefits packages, to recruit and retain good employees who serve the public.

Q4. Since the 2016 election, there has been significant media attention to the perceived divisions in America between rural and urban areas.  When you were VACo president, you made working on common issues across rural, suburban, and urban area a focus of your tenure.  Are there lessons from the local level that can be applied nationally?
PG: As a Fairfax County Supervisor, I have an advantage of representing a large, established, urbanizing jurisdiction, but the people issues are pretty much the same anywhere.  Understanding and identifying needs, providing services and solutions, and finding the revenue to support those functions, are shared by various levels of government.  The scale may be different, but the ability of government to provide basic services to all its citizens should not be partisan.

I do find that participating in regional, state, and national organizations, like MWCOG, VACo, and NACo, gives me a greater understanding of the challenges we all face as elected officials.  I always encourage newly elected officials to expand their knowledge and understanding outside of their own jurisdictions.  It leads to better decision-making, and sometimes we actually can help each other achieve desired outcomes.

Q5. In your view, what are the key challenges and opportunities facing Fairfax County in the next 10 years?
PG: Multi-modal transportation and housing that is affordable are probably the top two.  Layer onto that a growing and increasingly diverse population, and an aging population, and you can see that we need to change some of our traditional approaches, and also find new sources of revenue.  As a great place to live, work, play, and learn, Fairfax County enjoys a well-educated workforce, and new technology sectors, along with the INOVA Center for Personalized Health, offer incredible opportunities for new jobs, new business creation, and an ongoing sustainable quality of life for all our residents.

Q6. Who are your role models in public service?
PG: As noted earlier, my treasured mentors were Senators Morse and Church, although I may not have realized it at the time.  Senator Church’s wife, Bethine, also was a great role model.  Known as “Idaho’s Third Senator,” she focused on personal and sincere human interaction, which I have tried to emulate.  She also taught me that a great smile can break down lots of barriers!